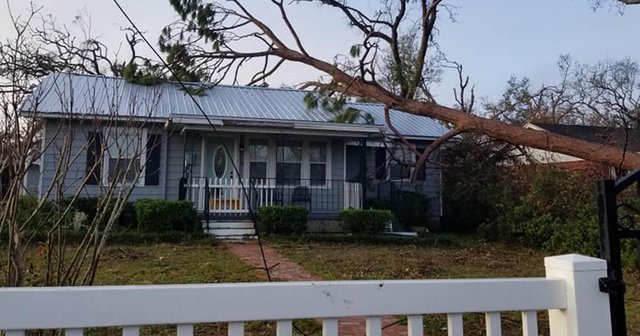 The 1,400 square-foot home, built in the 1940s, survived ferocious conditions when Hurricane Michael struck as a Category 4-plus storm last fall. With wind speeds of 155-mph, Hurricane Michael’s fury wiped out nearly everything in its path, including causing tall trees to snap and slice some homes clean in two. Roofs ripped off and homes blew apart, leaving Panama City in rubble.

Fortified with a metal roof, MRA’s Top Survivor Home not only endured Michael’s impact with minor damage, but it also helped protect the family inside. The winning homeowner, Kristi, felt her home lift up from the foundation and shake violently as the hurricane smashed into nearby homes and buildings. When the storm subsided, the damage in its wake was horrendous. Many shingle and asphalt roofs were shredded or half-destroyed. Yet Kristi’s home was completely intact, and to her surprise, the metal roof was holding up a giant 60-foot pine tree that had toppled directly above where she and her family had been hunkered down, waiting for the storm to pass. Not only was the roof supporting the massive weight of the tree, it sustained almost no damage.

Today, homeowners whose roofs failed to withstand Michael’s wrath are still suffering. The city deemed many such homes as “uninhabitable” due to not only unsafe conditions, but because of mold and mildew caused by water penetration. Every home on Kristi’s block was designated as such—except for hers.

MRA launched the Top Survivor Home competition to highlight how U.S. and Canada homeowners are taking steps to fortify their homes against destructive climate challenges, including massive hurricanes, freak hailstorms and wildfires, by using stronger building materials such as metal roofs. As the winner, Kristi will receive a $1,500 grand prize, but she considers her fortunes to be far greater.

“Our roof saved our lives,” she said. “When you live through something this horrific and understand the power it has to cause mass devastation, it’s shocking to hear people say they are replacing their roofs with asphalt shingles again. It’s simply not worth the risk to your home, or your life.”

Back to News & Media
Share
Or copy this URL: https://www.metalroofing.com/news/mra-selects-2018-top-survivor-home-winner-enduring-hurricane-michael/