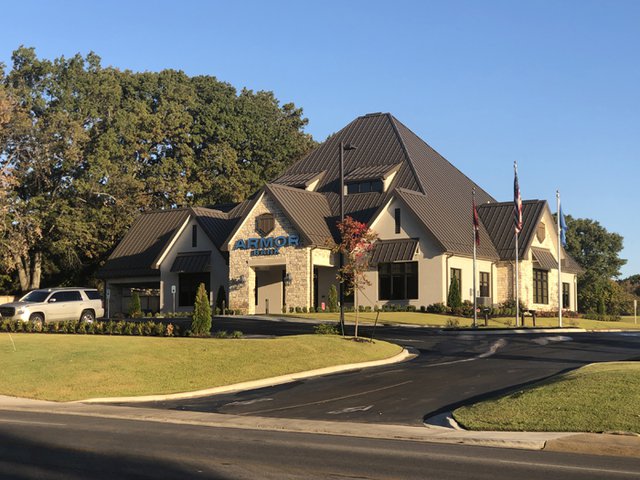 The roof pitch or slope refers to the rise or fall of a roof over 12 inches. Roof slope is typically expressed numerically, such as 1:12 or 1/12, meaning the roofing plane increases 1 inch above the eave height for each 12 inches the run travels toward the ridge.

Metal roofing is well-known for its outstanding performance against mother nature. From hailstorms to hurricanes, metal roofing performs better than other material options like membrane roofing and shingles. With that said, like with any other product, problems can occur.

While installation errors lead to most issues, panel side laps, incorrect panel profile selection, and fastener locations can be problematic for exposed fastener panel installations on lower roof slopes.

Panel Side Laps
The term “panel side lap” refers to the area where two exposed fastener metal panels overlap, as shown in the images.

On lower roof slopes, side laps can be prone to a phenomenon called capillary action, which occurs when water siphons its way up the seam into the building envelope. Placing a row of butyl seam sealant on top of the rib of the first panel before placing the second panel on top typically addresses this issue.

Consequently, when using exposed fastener panels at slopes between 3:12 and 1:12, the International Building Code and most panel manufacturers recommend placing a row of sealant tape along the entire overlap connection.

In contrast, projects with roof slopes of 3:12 or greater can omit tape sealant at the lap connection with most panel profiles due to the steepness of the slope and the speed at which water exits the roof plane.

From a distance, it's hard to appreciate the subtle-but-important differences in exposed-fastener profiles. McElroy Metal's MESA and Mega-Rib panels provide good examples. When installing Mega-Rib panels, McElroy recommends sealant tape be used on the top rib of the underneath panel before placing the next panel, regardless of the slope of the roof. With MESA panels, which have integral drain channels formed into the profile, sealant tape is only needed if the panels are being installed on slopes less than 3:12.

Panel Profile
The panel profile also bears consideration. Major and minor ribs create the aesthetic look of an exposed fastener panel; however, the height of the major ribs isn’t the most important element. When considering slope, the shape of the rib on both sides of the panel is more important than its height.

To illustrate this point, consider the images of the Mesa and Mega-Rib from McElroy Metal. The photos show the panel shape on the left side of both panels. While there are some minor nuances, such as leg length and pitch, the shapes appear mostly similar.

In contrast, the images compare the right side of the panels. Notice the minor bends in the Mesa image. This feature, often called an anti-siphon channel, creates a barrier against water intrusion from capillary action. Note the lack of this feature for the Mega-Rib panel.

While this difference may seem minor, it isn’t. Instead, it directly affects panel performance and weather integrity. Consequently, we recommend butyl seam sealant for all roof installations with the Mega-Rib panel, regardless of the slope. In comparison, butyl sealant isn’t necessary for applications with the Mesa panel on slopes above 3:12.

Fasteners
An exposed fastener panel means a screw pierces through the panel and into the substructure during installation. While exposed fastener systems offer a more economical price point than standing seam systems, their use is limited to project types with specific roof slopes. 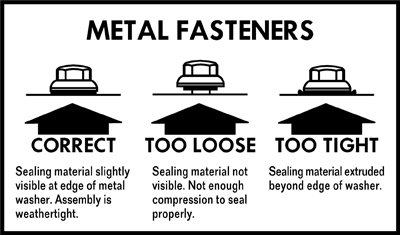 As the roof slope increases, rain and snow slide off the roof more quickly. In contrast, lower roof slopes allow all forms of moisture to remain on the roof longer and consequently allow more time for water to penetrate the system at the fastener location. While the washer around fasteners seals the hole, incorrect installation, as shown in the chart (image above), and extended submersion of the washer can cause the washers to degrade and allow water into the building. Consequently, exposed fastener panels aren't appropriate for slopes below 1:12.

Kathi Miller is in charge of Architectural National Accounts at McElroy Metal. She can be reached at [email protected].
Back to News & Media
Share
Or copy this URL: https://www.metalroofing.com/news/how-slope-affects-exposed-fastener-metal-panel-installation/