What is an R Panel?

R-Panel is a multi-use. exposed fastener metal wall and roof panel that was originally designed for use in pre-engineered metal buildings. However, since its inception, the use of R-Panel has expended into other uses.

Especially in the southwest, R-Panel is also used extensively for residential applications. End uses in included residential metal roofing and buildings that combine workspace with living spaces. These applications are commonly referred to as Barndominiums, Shomes or Shouses.

R-Panel is available with and without a purlin-bearing return (PBR). A purlin bearing return is an extension of the edge of the R-Panel that rests on the roof purlin or roof deck and provides support for installers. R-Panels with a PBR are typically utilized on roof applications because roofing contractors prefer the extra support when installing the roofing panels. Non PBR panels are more often used for wall applications where the extra support is less important.

A purlin is a sub-structural support for the building that is also a fastening point for metal panels. In the image below, purlins are over the main frame rafters along the roof. A girt is the terminology used for a similar sub-structural member that is installed along the wall. 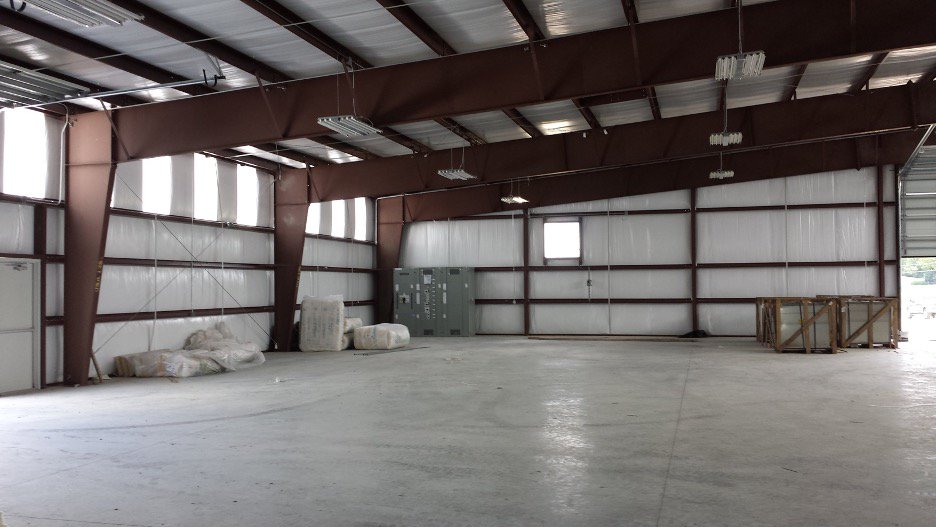 Historically, Silcone Modified Polyester (SMP) was the standard coating system for R-Panel because SMP's were the go-to coating for the pre-engineered metal building industry. However, as pre-engineered buildings become more sophisticated and their end-uses became commonplace for high profile commercial projects or residential metal roofing, there was a need for a higher performing coating.

Today, fade and chalk resistant Kynar 500 (PVDF) coatings are a McElroy Metal standard for R-Panel and provide homeowners and building owners with a long-term, high performing panel that retains its original color and beauty year-after-year. For shade and shelter applications or buildings whereby long-term aesthetics and performance are not of primary concern, McElroy Metal also makes available R-Panel with SMP coatings. However, for most owners, the nominal up-charge to for a Kynar 500 coating is negligible when you factor in the entire cost of the project.

Why choose Kynar 500 for you metal roofing project?

Installation of R-panel roofs requires a minimum slope of 1:12 and butyl sealant should be utilized in the laps.

Back to Member Provided Resources
Share
Or copy this URL: https://www.metalroofing.com/member-provided-resources/what-is-r-panel/