Condensation, Ventilation, and Your Metal Roof

Nothing can be more pleasant-sounding than a cold glass of your favorite beverage on a sultry summer day. My choice is unsweetened iced tea. And, as I picture that glass of iced tea, what comes to mind first are the droplets of condensation that quickly form on the outside of the glass when I carry it outside. 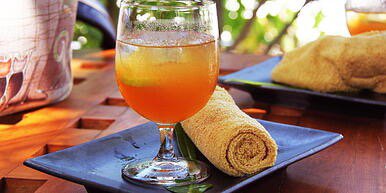 I love this illustration and use it frequently when talking to property owners about the risks of condensation in their attic spaces. Those droplets form on the outside of my glass of iced tea when the dewpoint is reached. Dewpoint is, quite simply, the “right” combination of moisture and temperature differential that causes moisture in the air to condense and form water.

While that condensation on the outside of the glass of your favorite beverage may be a welcomed sight, it’s not so welcomed if it’s in the attic of your home or other building. Condensation in an attic will result in mildew, mold, and rot. It also will increase the moisture level of the insulation on the attic floor, reducing its effectiveness considerably as it becomes damp and even soggy.

Over the years, the chances of condensation occurring in an attic have increased dramatically. For one thing, we have added more moisture sources inside our structures. Things like plants, laundry, cooking, bathing, gas, and wood stoves all increase the ambient moisture levels inside of buildings. But, furthermore, especially since the 1970s, we have worked to make buildings more airtight -- we even test them for airtightness. Things like improved doors and windows, house wraps, and other exterior wall claddings all mean that moisture which used to drive its way to the outside through the building envelope now instead is carried with convective airflow upward in the building, oftentimes eventually ending up in the attic.

So, as you think about this warm, moist air migrating into the attic of a building, consider again that cold glass of your favorite beverage. If you introduce it into your attic, condensation will quickly develop on the outside of it, just as it does inside. The same thing will happen with other cool surfaces in your attic. This commonly is the underside of the roof deck. And, of course, that condensation first soaks into the wood, raising its moisture content and making it subject to rot, until it eventually exceeds the wood’s ability to hold moisture and it forms condensation on the surface as well.

One of the things that really makes me shudder is seeing metal roofs installed on smaller structures such as residences without solid roof decking like plywood. When exposed to a moisture-laden attic space, the non-absorptive back side of the metal panels will quickly and dangerously condense with moisture droplets. I have encountered situations so severe that the homeowners thought it was raining in their attic.

Now, with larger structures such as warehouses, factories, churches, or retail stores, this is less of an issue because you usually have lower ambient moisture levels as well as more air exchanges and therefore a much-reduced risk of condensation.

But homes are smaller, and we generate a lot of moisture in them. As a result, this risk of condensation is far greater even if the decking is in place. A metal roof on such a structure without decking is a major problem about to happen. 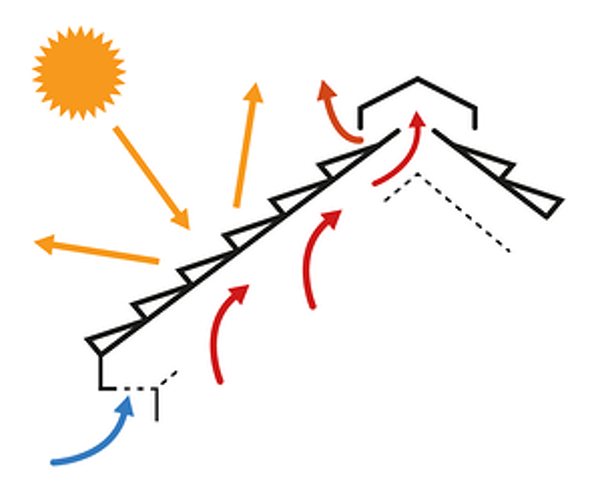 So, what is the answer for condensation control in all buildings? The best solution for most construction methods, excluding those utilizing a conditioned attic space, is ventilation. Another good option and tool in your tool belt against condensation is the use of vapor barriers to help slow the migration of moisture from the living space into the attic.

Many people I have run into mistakenly do not realize that the living space is the source of the moisture we’re talking about that is at risk of condensing. During most seasons and times, there is higher moisture inside a structure than outside. Moisture naturally tries to drive to drier areas, carried by warm air. If it reaches a cool surface along that path, it condenses, and that is what we want to avoid.

Proper ventilation consists of intake vents and exhaust vents. Intake vents are best located along the lower outer edges of the attic. Exhaust vents then are best located along the ridge or peak of the roof. I like to think of trying to create “rivers” of flowing air traversing the entire underside of the roof, carrying out moisture and hot air while keeping the roof deck dry and healthy.

Oftentimes, the intake vents are in the eave soffits of the structure. Care must be taken to ensure that they do not get blocked with insulation over the years. Baffles are sometimes used in the attic to help keep the airways clear and open. These vents are commonly installed by the same contractor who installed siding, fascia, and gutters on the structure. The exhaust vents are then often part of the roof system and installed by the roofing contractor.

If the structure does not have soffit overhangs and therefore no room for attic air intake vents, roofing manufacturers sometimes offer vented starter/drip edge pieces that extend out the eaves a couple of inches to bring air into the attic.

Both intake and exhaust vents should carry an NFA rating. This stands for Net Free Area and quantifies the amount of open area that allows air to pass through the vent. You ideally want an even balance of NFA for intake and exhaust or, if anything, a somewhat pressurized system with slightly more intake than exhaust. Local building codes will specify the total amount of NFA based upon the building size, with the guideline that it is split evenly between intake and exhaust.

With proper precautions, that condensation can stay where it belongs – outside on the glass of your favorite summer beverage.

This is a guest post from Todd Miller, president of Isaiah Industries, who has spent his entire career of 35 years in the metal roofing industry. He frequently answers questions about roofing, ventilation, and other topics on his educational website.

Back to Member Provided Resources
Share
Or copy this URL: https://www.metalroofing.com/member-provided-resources/condensation-ventilation-and-your-metal-roof/